A downloadable game for Windows

NOTE: This game is currently in an alpha state. There are ~15 days of in-game content. The game is NOT in it's final state and is lacking in a bunch of content, and may have serious game breaking bugs.

Faunus Fields hearkens back to the days of Harvest Moon -- inspired by that series, as well as the Rune Factory series and Stardew Valley, bringing a new twist to the genre, making 16-bit farming more exciting than ever!

The game begins with you moving to a town that is threatened by a vile beast, to help the townsfolk figure out a way to get rid of the creature. You are told that every farmer chips in some of their crops every week in tribute to appease the beast.

You will need to befriend the townsfolk in order to get their help, and figure out how to defeat the beast threatening the town!

Throughout Faunus Fields you will have two options to defeat the beast. Will you be the non-violent farmer who figures out a way to get rid of the beast without killing it and it's minions? Or will you be the fighter who grows stronger and stronger until you are able to destroy the beast once and for all?

One or both paths can be taken in your quest, each providing a different way to play the game!

Grow a number of crops, each providing different benefits on your journey and helping you upgrade and expand your farm, as well as get the tools you'll need to defeat the beast.

Upgrade your tools, expand your storage, and design your farm the way you want. Want to build paths between your crops so you can get to them faster in time for harvesting? Want to build sprinklers to free up time from watering your crops each day? Build these and more in the workshop situated on your farm!

Fight your Way to the Beast

There is only so much time in the day, and you must figure out how to defeat the beast, gather materials, foster relationships, and harvest crops before the next feeding day! 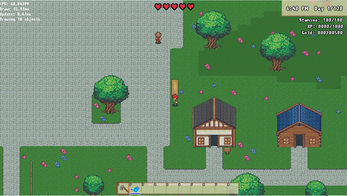